Wandering among the engineers, strategy directors and managers of something called “connected customer experience” at the Smart Kitchen Summit, one had to wonder: do any of these people actually cook?

The conference, now in its third year, brings together people on the front lines of technology to figure out how to move the digital revolution deeper into the kitchen. The kitchen is where Americans spend 60 per cent of their time at home when they are not sleeping, says Yoon Lee, a senior vice president at Samsung. That’s why so many tech companies are focused on it.

Almost everyone here at Benaroya Hall, the home of the Seattle Symphony – whether an executive from a major appliance manufacturer, a Google engineer or a hopeful young entrepreneur with a popular Kickstarter concept – agrees that it is only a matter of five to 10 years before artificial intelligence has a permanent seat at the dinner table.

The coming kitchen technology, they say, will go well beyond a screen on the fridge door that allows you to check the weather while you search recipes.

Your power blender may be able to link to a device on your wrist that’s been tracking your diet, then check in with your freezer and your kitchen scale. It could set up the right smoothie recipe based on what’s on hand, how much weight you’ve gained and which fruit you prefer. 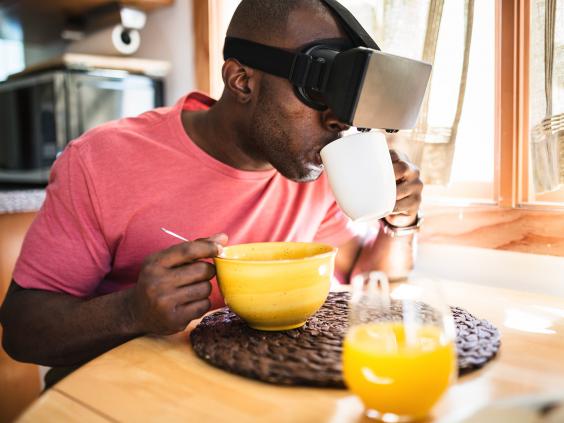 Strapped in for the ride: AI technology could one day be able to understand your cooking needs (Getty)

Your oven will be able to decide how and when to start roasting the salmon, then text the family when dinner’s ready. Your fridge may be able to place a shopping order, based on a careful study of how much you like to pay for certain items, whether you want them organic and whether peaches are in season.

Artificial intelligence will eventually understand your cooking needs so well that you need only tell a device that you’d like to make your grandmother’s chicken and noodles on Thursday, and all the ingredients will be ordered, paid for and delivered in time to cook. And when you start to cook, a virtual sous chef will help with technique; a smart pan will suggest you turn down the heat before you scorch the onions.

The most outrageously expensive food on the planet

The smart kitchen might even track how much of the dish you end up throwing away, and let you know who took the last beer in the fridge. (Don’t worry! It ordered more.)

“We are creating new actors in our kitchens,” says Rebecca Chesney, research director of the Food Futures Lab at the Institute for the Future, a nonprofit research centre in Silicon Valley that studies the impact of technology on human values.

“We are talking to them and they are talking back to us,” she says in a speech to the conference, which she urges to think first about what cooks might need in the kitchen and then design the technology to help them.

But based on the buzz here, many people see a future in which no one will need to know how to cook at all.

“You’ll get appliances and hardware that lets you perform at a higher level of proficiency than what you can train for,” says Nikhil Bhogal, a founder and the chief technical officer of June, which makes a wi-fi-enabled countertop oven by the same name that recognises the food you put into it and tells you how to cook it precisely.

Much of this is still just a glint in an engineer’s eye. To truly connect everything in the kitchen, technology and recipes will have to be standardised in such a way that food can be tracked from the farm to the plate.

The dreamers here talk of inventing a single database, like iTunes, for recipes, or even doing away with recipes altogether.

From the stage, American TV cooking personality and cookbook author Tyler Florence goes as far as to declare that “recipes are completely dead”, in the way that paper road maps are dead. He then announces that he is joining a “proprietary connected food platform” startup called Innit.

Innit is still in development, but it appears to be software based on online recipes that have been broken down into preparations for various starches, produce and proteins. It will eventually learn, through the miracle of artificial intelligence, what sauce you like on your chicken and whether you have chicken in the fridge, and then give you a recipe for it.

Cooks at the conference are sceptical. It is hard to find anyone who wants to discuss the joy that comes from cooking, or the escape from a hectic, technical life that softly scrambling an egg in the morning can bring.

None of the technical solutions seem to account for how a cook might consider the ripeness of a pear, or thrill from creating a new recipe out of a pile of fresh mushrooms. The sense of satisfaction in learning a new dish or getting better at something doesn’t seem to be part of the kitchen of the future.

“The assumption is that we’re all very busy, but want to cook like a chef at home so we don’t waste time making a meal that doesn’t look or taste good,” says Amanda Gold, a former food journalist who now consults with chefs and food companies.

Although she embraces technology that brings people back to the kitchen, Gold says cooking is both creative and emotional.

“If cooking becomes such a guided process that you don’t have any emotion around it, you’re going to take the heart out of it.”